IBA Member
#1
Spectacles Testicals Wallet
We all have a check list that's the basic model you can then make it as complicated as you wish,
anyway 0500 16/06/18 squires café myself and a friend Andy Burnside {a fellow marshal at the Classic racing Motorcycle club www.crmc.co.uk} whom I got interested last year asked if he could accompany me as this was his first time.
Uneventful ride to Birch then up to Glasgow, weather predicted heavy rain they were depressingly accurate it started once we got over the Erskine bridge through Glencoe up to Ft William, as we passed the commando memorial at Spean Bridge to find this cage driver doing a three point turn on the right hand bend by the entrance as he had missed the turn after I had voiced opinion on his parents marital status and the depth of his intellect we kept on to Inverness weather slowly improving.
Sat nav,s why do they on occasion have a mind of their own at Drumnadrochit on the A82 it said turn left after a quick discussion we decided to follow it out of curiosity it made a change.
We passed the collision on the A9 apparently a classic SMIDSY the rider seriously injured best regards and a speedy recovery.
The weather slowly improving as we got further north got to Wick before we saw blue sky, best part about the road from Inverness to wick is you have to turn round and do it again
The A9 south of Inverness must be the most boring sleep inducing road ever built might return via the A82 next time however good run south to Edinburgh the new Forth road bridge caused some confusion getting to Dreghorn services bleeding sat nav again but we got there.
On the last leg now not sure why the stop at Berwick-on-Tweed is necessary, the A1 south was quiet hardly so a nice run back to Squires arriving at 0230 Andy Burnside was well impressed and wants to do another SS ride another recruit for insanity.
The bike ran perfectly but blew the oil seal on the final drive and is on the bike lift awaiting parts if I can't get it done by next weekend for the RTE I will be in the car.
thanks
Posted by John Morning at 12:51 No comments:

Sunday morning at Squires Cafe, Yorkshire, I am having an old fashioned instant coffee at the café and thinking about the weekend I had.
I am not the one for bucket lists, I am more looking on a daily/monthly and yearly base what I like to do. So there are no regrets when something didn’t work out in life. One thing on my real bucket list was to ride an SS1000 officially and to become part of the "Worlds Toughest Riders". And the best one to ride is the RBLR1000 to support the British Legion.
There I was at 00:20 riding in after about 20 hours on the road and 1000 miles later. Never underestimate the emotional power when people are cheering you in, people who understand what you did. I felt emotional after the sun broke through at Perth and I felt it coming in. 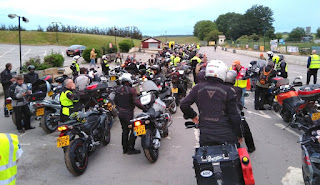 We started at 5:00 all 138 of us. Being signed in, the rules of the Iron Butt Association are tight, and waved off by people who are committed to riding and to the RBLR, makes it an easy start, even for me at 5:00.
First stop at Birch Services, again the RBLR is waving at us. Signing the first evidence. It is up to Fort William for the second one. The first miles are dry but after 300 km it starts to rain. Time for a first fuel stop for the bike and to feed myself. The route along Loch Lomond is very pretty, when it is not raining….. Fort William, likewise. But it is raining and luckily my jacket is keeping me dry and my trick with the sponge at the screen, to prevent spray under my visor, works too. Talking about the helmet, it felt comfortable at the right time. I had to buy a new one because I broke the visor when I dropped the helmet and replacement ones were not available fast enough. At Fort William I had a small bite and drink and up it was towards to Wick.
It stopped raining about 1,5 hours before Wick. Suddenly traffic stopped too and there was a huge 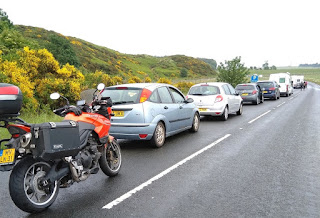 queue. I rode passed it and was stopped by a cross policeman, he asked me what I was doing and what I did was illegal and that sort of things and that I had to stop. (period, and that was an order). I wondered if it was a bike accident what happened and that this was one of the things that made him this cross. It appeared it was one biker that had an accident involving a car and it was one other rider of my ride. (I found out later, bummer I hope he will be OK soon). With a delay I arrived in Wick and my sat-nav pointed me further, so I went. I ended up somewhere silly, so I lost 20 minutes or so. Note to myself: prepare yourself better next time round.


So in Wick when I filled up and got my ticket for the evidence I was there. I was thinking that it is now only 800 km back and it is only 15:30. Well, it is the same distance to ride from home (Gennep,NL) to Italy. Would I ever consider starting at 15:30 to ride to friends in Italy, well most likely not….. SS1000’s puts things and distances in different perspective. 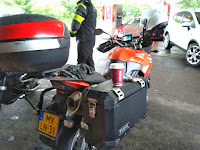 Riding down it started raining again. Filled up half way to Edinburgh to get fuel and a bite. At Perth suddenly like clouds were cut with a knife, the clouds broke and the sun started shining. There they were, the beautiful colours of Scotland. Stop at Edinburgh, got rid of the waterproof trousers, which helped me enough, only a wet crotch, and mounted the sheepskin. What a luxury! Berwick, the last station, still light. Next stop was back to the Squires, two hours of motorway hammering down the A1/M1 at 120 km/h.

At 0:20 coming in at the Squires, the cheers lifted my emotions, the signing off brought the relief, the verification and the certificate to prove I have done it signed by Phil, was a reward that cannot be underestimated. I was shivering a lot, but after a sausage sandwich and a coffee and some more to eat, it was much better. I believe it was a combination of cold, shortage of easy available energy, fatigue and emotions. Got to bed about 1-ish and fell asleep instantly.
Woken up at 9 in a nice warm tent I felt fit.
Ordering breakfast, I was talking to a lady who did the 500-miles on a Street Twin, she nailed the hammer straight on the nail saying that they/we long distance riders are different. I believe more relaxed and supportive. Camping and talking to other participants was different. It is not about how good looking the bikes are, because most of our bikes are in a well used state, but about thinking and coping with riding conditions.
Leaving me a word of thanks for everybody who made it possible. The team of the IBA-UK, the RBLR, the people at the Squires café and also everybody who supported me in this ride. With donations, words of admiring (or disgust), likes on my posts and everybody else who think I (and we) are nuts, because I consider that as a word of praise.
THANK YOU!

Paul Ten Broeke
Posted by IBAUK Webmaster at 10:10 No comments: