From Russia with love

One of my mates had a problem at the Latvian border on Thursday morning and hadn't come through with us. He was finally able to cross into Russia around midnight Friday and at 0330 he was 120 miles from Moscow and hoping to meet with us before our departure early Saturday morning. Just after 0600 he was having breakfast in a petrol station outside the city. In fact he arrived at the Cosmos just as Dmitry and Pavel arrived to lead us in convoy across the city to Red Square for some final photos with our bikes. A helmetcam video exists of this ride but I won't link to it as it includes 13 seconds of me failing to cancel my indicator after a turn and if you can't see it no such mistake was made. What happens in Moscow stays in Moscow! 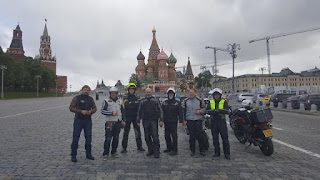 Our hosts then led us out of the city and back to the M-9 before pulling over and waving us on our way.

My goodness it was cold once we left the city and eventually I had to pull over and add another layer. There were four of us leaving Moscow but two were now pressing on leaving just the two of us to maintain a steady pace westwards. We agreed that we would just return to the same hotel in Ludza and not press further on as the front runners were bound to. We started to pay attention to fuel consumption again and also to using up Rubles in petrol stations. In most (but not all) Russian petrol stations you hand over some cash or authorise a card then draw fuel then settle up. It can seem a bit strange to stop in a largely vacant lot and pass cash through a small window to an unseen hand but it works just fine and we even stopped again to top up before crossing the border.

We knew from reports by Phil & JB that they crossed back into Latvia in about half an hour. We were not so lucky and it took two hours. Also that was the point at which my Zumo decided that enough is enough and just powered off and stayed dead. I tried the USB connector - yep that still works so if necessary I'll just use that. On arrival at the hotel a while later I discovered that I'd actually dropped my USB cable somewhere along the way so dead reckoning then.

After a brief exchange of views about the price of hotel rooms and the wisdom of attempting a 1,000 mile ride at 0400 Sunday we opted for several beers tonight and a leisurely breakfast in the morning. We used these sessions to cure ourselves of secondary plans like visiting Auschwitz or Gdansk "on the way home". Sometimes when looking at a map you think "I've come 2,000 miles what's a few more?" Well Ludza to Calais is 1,380 miles; Ludza, Gdansk, Calais is 1,662 miles. That's a diversion of 282 miles, the same distance as from Suwalki to Ludza on day three of the ride out. No, IBA RTEs should be there and back not excuses to just wander around. There'll be plenty of other trips to incorporate sightseeing. 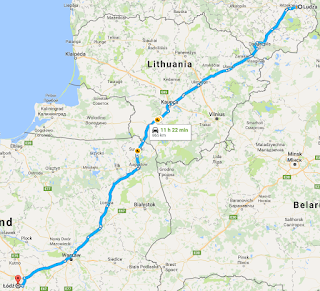 Sunday morning after breakfast I cleaned the Zumo's connectors with an alcohol rub and magically it agreed to play (didn't last though, it got tired again later on and went back to sleep). Anyway, we saddled up and headed southwest and were much better prepared this time for the roadworks with "interesting" surfaces. Right across Lithuania and into Poland we were running on Russian petrol; I was getting 18-19 kilometres per litre. Eventually we pulled into a Shell station and I treated my engine to a tankful of V-Power. Back to 22-23 kpl almost immediately! The Russian fuel was pretty cheap, around 60p per litre, but it's not the best quality.

In Warsaw we encountered some weather. Serious, biblical quantities of rain, blowing sideways with some force; thunder and lightning like the end of the world and some traffic. We filtered through  almost 14 million miles of cars backed up in the city centre until we found the cause - an unseated rider being treated by paramedics. After a few minutes we were shown a way round the chaos and we took off, into even harder, faster, rain. Visor open was too painful; visor closed meant not being able to see anything at all. We survived and slowly found our way back on track, a motorway continuing  southwest towards Lodz.

Not far past Lodz I started recognising the signs of "time for bed" and flashed Mike several times indicating my desire to get off the road. Eventually I turned off into a service area but Mike carried on. Well that's just the way it is; ever the lightweight I checked into the motel and texted Mike to let him know what's happening. The motel I have to say was a delight: clean & comfortable with everything I could want - heated towel rail for drying wet gear - and run by a husband & wife? team who bent over backwards for me; breakfast of champions. In fact when I got home I wrote a thank you letter with the help of a Polish neighbour. £33 including breakfast!

So the last day dawned, my Zumo decided to play again, all by itself with no special treatment this time and did in fact continue to work all the way home. I set off towards Calais at a fair old lick. The speed limit on the Polish motorway 150kph but I don't think anyone drives that slowly. The only interruption is the toll booths (all Polish motorways are subject to road use tolls) and at one of these I learned yet another lesson in the never-ending learning curve of motorcycle riding: when you unzip the top of your tank bag to retrieve the toll ticket, IMMEDIATELY zip it up again. Not long after leaving the last toll booth I noticed that my strip of pills had gone for a walk. Oh well, I'll HAVE to get home today now.

It felt strange having crossed into Germany to realise that I had now slowed down, in Germany, on an autobahn with no speed limit! It's true, the overall speed of the traffic was lower in Germany than in Poland. Those who reckon that speed limits reduce speeds need to pay attention.

I arrived in Calais well ahead of schedule and caught a train almost immediately. Obviously when I emerged at Folkestone, despite having enjoyed clear, dry, sunny weather all day, driving rain stayed with me all the way home.

Being the first group of IBA riders we did legalities by the book but in future we'll be more relaxed: get third party motor insurance from a shack once you've crossed the border. It may well not be worth the paper it's written on in the event of a claim but it does make you legal. Nobody asked to see our International Drivers Permits but they're only £5 from a Post Office so what the hell. Nobody asked to see my fire extinguisher (yes fire extinguisher, what do you mean you don't carry one?) or, as far as I can tell, checked my fingerprints.

Travel the correct way - make yourself at home wherever you are as opposed to trying to make everywhere you go like home. Be patient and calm at border crossings. Our group included a Suzuki, a Triumph, a Honda, a Harley-Davidson and two BMWs so even if you ride a BMW you can still comfortably ride to Russia and back.
Posted by IBAUK Webmaster at 21:52