The M-9 motorway runs from the Latvian border some 400 miles into Moscow. For context, that's roughly the distance between London and Glasgow. In Russia that entire route is cut from the forest with only a few settlements the size of English villages along the way. Don't be fooled by the term "motorway" either. The last 75 miles are recognisably motorway but until that point the road is at best equivalent to a minor English A road, not even dual carriageway. Not always surfaced either!

Every now and then we came to junctions offering side roads. These tended to have tarmac for 30-100 metres before trickling off into dirt tracks. I'm pretty sure that most of those deviations led to places where dragons are still living.

The Russians have a different approach to the roadworks strategies employed elsewhere in Europe. In England roadworks involve diversions, reduced speed limits, average speed cameras and massive inconvenience for road users. In Germany roadworks involve very sudden lack of road followed up with no useful information whatsoever. In Russia the roadcrews all wear hi-vis orange and you're expected to drive round them. If they've felt the urge to remove the road surface you'll obviously need to go a little slower and more carefully and you'll definitely want to swerve round large diggers etc. 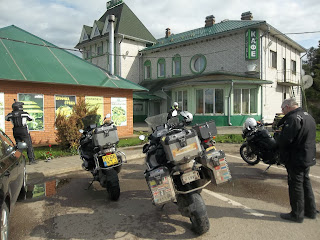 Eventually the time comes when even we, World's Toughest Motorcycle Riders, have to stop for sustenance and we duly pulled in to a rather charming roadside diner. Unfortunately the staff only spoke Russian (and none of us could manage more than 'pojolsta'), the menu was in Russian using the Cyrillic alphabet (which none of us could read) but a Russian diner came to our rescue, translated the entire menu for us and placed our orders with the waitress before returning to finish his lunch.

As the food arrived, our rescuer finished his meal, came to us and told us that to welcome us to Russia, the meals were a gift and he got into his car and drove off. The stuffed chicken legs and rice were delicious, even more so as they're free.

I had received a text from the president of IBA Russia telling me that he wished to meet up and lead us into town from a convenient point on the motorway rather than have us struggle across the city in traffic. I'd interpreted that as "on Friday for the photo in Red Square" but no he was insistent that he'd meet us on our way in today. I added the suggested petrol station as a waypoint but also sent him a link to my tracker. 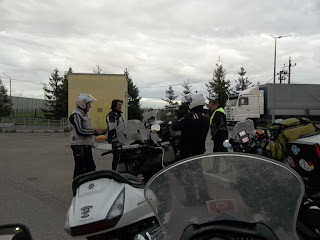 As we approached the city limits we noticed a biker frantically waving at us headed out of town. It didn't seem to be the normal "hello fellow biker" thing we'd had right across Europe and we pulled into a petrol station to fine-tune our entry to the city.
Moments later Dmitry flew in beside us on his Honda Silver Wing and introduced himself.

After spending a little getting-to-know-you time we lined up for a group ride to the Cosmos hotel. Dmitry asked what would be a comfortable speed. I said "100-110kph" so obviously we hit 145kph until the traffic became thick enough to reduce the speed. Moscow traffic is busy even at 10pm and in the midst of it I was buzzed by two local bikes which distracted me for a split-second, long enough to lose the flow and I came to a hard stop behind a broken down Mercedes van in my lane. It took perhaps a minute for me to find a way round it and of course the others were all now out of sight. I switched to following the satnav but after a little while I realised that all was not well and pulled over. The Zumo was calmly taking me back to the motorway to meet up with Dmitry! I reset and found the Cosmos within ten minutes or so. 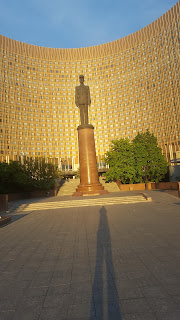 The Cosmos hotel is a huge Soviet era thing with almost 2,000 rooms and an enormous statue of Charles DeGaulle; we were given rooms on the 21st floor with magnificent views across the city. See if you can guess where we ended up half hour after checking in? Obviously!

So there we were, a small group of gentlemen of a certain age, sat at a bar, helpfully labelled "pub" enjoying the protection of some other gentlemen wearing ill-fitting grey suits while being entertained by the sights and sounds of a busy international congregation of people out for a good time, in various ways. Fortunately I don't speak Swedish.

Friday morning had us join the melee in the vast canteen for breakfast. Almost anything you can think of is available for breakfast in the Cosmos, every kind of meat, vegetable, fruit, cereal, eggs, fish. Nobody goes hungry there, not even vegetarians. 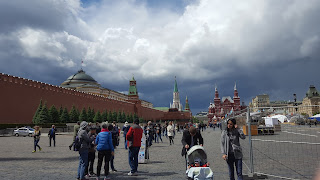 A gentle morning followed at lunchtime by an excursion on the Moscow Metro across town to Red Square. Walking onto Red Square felt surreal to all of us, even those who'd been before. It's like another world and it felt slightly odd that we were even there at all. The square is huge and takes some getting used to.

We had some time to enjoy before the 4pm standard group photo so we had Borscht followed by ice cream in a cafe in the Gum shopping mall and visited St Basils cathedral, now a museum.
After the photo we agreed to an early supper in a biker bar some distance away.  Fun & games with taxis finally saw us gathered in the Double Bourbon Bar for beer & bourbon followed by steak & chips accompanied by Pink Floyd.


next instalment here.
Posted by IBAUK Webmaster at 18:48