To the Russian Border

When I called, 18 months ago, an RTE [Ride To Eat] in Red Square, Moscow I was concerned that people would just laugh and nobody would come. I was wrong: initially some two dozen IBAers signed up, a big number by IBA standards. Many dropped out along the way due to a variety of circumstances ranging from ill-health to clashes with several major IBA events. On the day we were four from the UK, two from Finland and one from Switzerland. May not sound much but that's actually a pretty good turnout for what would be a ground-breaking 4,000 mile journey.

What's the big deal? What's different about going to Russia than, say, going to Riga, Latvia?

The short answer is "it's Russia". Will I be able to get a visa? How long will it take to cross the border? to reach Moscow from the border? what will the roads be like? what about bike insurance? breakdown cover? The answer to all these questions was "I don't know". Garmin don't supply maps for Russia and the road signs will be in Cyrillic.

In Leicester for the Brit Butt Rally I developed a problem with a tooth. Dilemma: should I delay my departure, possibly making the trip impossible, by getting my tooth fixed or should I risk having to get emergency treatment far from home? Resolving that took a couple of hours but I finally opted for hoping the tooth would settle down and be ok (it was). Off to Folkestone!

30 miles from home I realised I'd forgotten to fit the Airhawk - too late now, I'll just have to tough it out. 20 miles further on my Zumo felt the need to cycle power, that's not good. On the train I inspected the cradle and connections for the Zumo but all seemed good so maybe it was just a one-off. (You know it wasn't though, don't you).

First stop Hannover, Germany, a fair old trek given that I'd been up since the crack of dawn exchanging IT kit for bike trip kit, fiddling with a tooth, fiddling with the bike but only 400 miles from Calais and I arrived around 1am in desperate need of a shower as it was still 27c.

Day two began with breakfast followed by a 700 mile group (mostly) ride to Suwalki, Poland. We rode quite quickly for a while before analysing the effect on fuel consumption at various speeds. At one point I noticed the effect on my fuel consumption quite suddenly and made a hasty decision to stop for fuel in the middle of some roadworks. That decision was spot on as I took 19 litres (into my 20 litre tank) but in re-establishing contact with Mike the run leader, I guessed that he would continue on the route but slow down for us to catch up. After about 70 miles of hard, fast, catching up, we stopped and texted him. He'd opted for the "wait at next services" protocol but had given that up after a while and was now ten minutes behind us.

About 100 miles from Suwalki I cocked up again and failed to turn off the freshly opened dual carriageway as I watched JB and Mike disappearing round the corner. I texted that I'd find my own way then set about looking for fuel as I was quite low at that point. The Zumo's first offering involved crossing the central barrier AND  a two metre high chainlink fence. After ignoring the "Do U-turn when you can" for some distance I was directed to a place where a petrol station will be one day, but this wasn't the day. The signs were all in place, unlike the actual buildings and pumps, but they were all crossed out. After yet more U-turns and other physically impossible suggestions from the cutting edge of technology which is the latest Garmin offering I resorted to dead reckoning and some improvised route making to reach an actual live petrol station.

The rest of the journey, 100 miles or so, passed through small villages, pretty churches, country roads and some thoroughly attractive scenery. If I was a half-decent travel writer I'd have taken photos along the way but you'll just have to take my word for it, or ride it yourself. I arrived at 10pm, just in time for the restaurant to close, no problem as I wasn't hungry, but joined the others for a beer. They stopped serving beer at 10pm also but IBA riders are handsome, smooth and resourceful and able to order beer in multiple languages while juggling 2-litre fuel cans and singing Land of Hope & Glory. 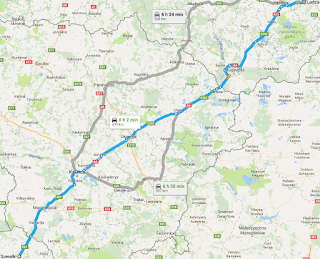 Day three, an extremely lightweight 285 miles only, introduced us to the rather different environment of the Baltic states of Lithuania and Latvia. It was here that we discovered that, whereas in Poland Garmin had included petrol stations yet to be built, here Garmin had included roads that had yet to be built and we spent quite lot of time waiting at temporary traffic lights 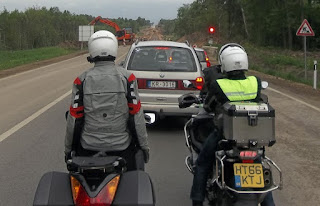 followed by some manly offroading on what was loosely described as a "road surface".

Those 285 miles took all day because quite a lot of the day was spent doing 20mph and a fair bit spent doing not much more to avoid being flashed by speed cameras in Lithuania.


Day four - to the Russian border!
A quick blast, 20 miles or so, followed by a masterclass in waiting. Those wishing to transition from 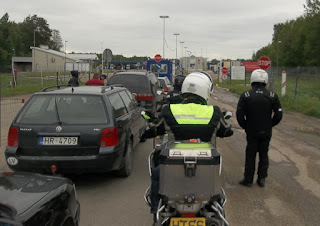 Latvia to Russia must learn the art of patience because most of the process involves waiting. Wait for the Latvian policeman to call you forward, then Latvian border patrol, then Russian I can't remember what they all were or in what order but I remember many faces and many pieces of paper.

To describe the Latvia/Russian border as an exercise in bureacracy is to grossly underestimate the process. Those with a prior exposure to Kafka's The Trial will be better prepared than others. Fill in the form, in duplicate, hand it in for inspection, get told off for incorrectness and given two more forms, try again, hand them in, wait while they're keyed into a computer and printed out, then wait while they're stamped, then, finally, move on to the next kiosk for more waiting.

Only three hours though and we're released into the wilds!


Next instalment here.
Posted by IBAUK Webmaster at 09:12